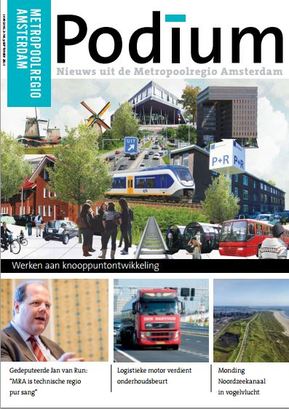 Publication of the Amsterdam Metropolitan Congress
The Dutch government has three tiers of governance: central, provincial, and municipal. The Metropoolregio Amsterdam is a collaboration between the provincial and municipal authorities in the northern part of the Randstad. Collaborations between private enterprises and municipalities in forming policies is common. According to the municipality of Haarlem's website:

"Metropoolregio Amsterdam, or Amsterdam Metropolitan Area as it is internationally known, is an administrative collaboration between the city of Amsterdam and local and regional authorities in the northern part of the Randstad. The partners make agreements concerning traffic and transport, the economy, urbanisation, landscape and sustainability. Joining forces in this way has resulted in an improved rapport, faster decision-making and a greater say in The Hague. The aim of the platform is to strengthen the region’s competitive position, both nationally and internationally. The Amsterdam Metropolitan Area extends from Ijmuiden to Lelystad and from Purmerend to Haarlemmermeer."

The governance of the AMA is done by the Central Administration and administration is done by the Coordination Committee. The Central Administration arranges conferences between the constituents and insures agreements are followed through. There are several specialized platforms within the Administration, the Noordvleugal Accessibility Platform which deals with mobility, and the Regional Economic Stimulation Platform which deals with economics. They have a website where you can get updated information on conferences and publications, http://www.metropoolregioamsterdam.nl/.