In the 2000's, Amsterdam saw itself slide out of the top 5 most attractive business centers in Europe as places like Madrid and Barcelona became more competitive. The municipality responded with a host of studies and cooperations conducted across the metro to raise the bar. One such initiative that came out of this was Amsterdam Topstad, an intiative by the Creative Cities Amsterdam Area which is:

"Creative Cities Amsterdam Area (CCAA) is an initiative of thirteen partners. This includes seven municipalities, two counties, two development companies, a Chamber of Commerce and the State. The Amsterdam Innovation Motor and Taskforce Innovation Utrecht Region are responsible for implementation."

Their aim is to work together to identify the weaknesses of the region in attracting foreign investment and diversifying the economy outside of the financial sector and ICT in a regional collaboration. Some consequences of this have been an increase in construction of office space in the Zuidas region and greater connectivity between the area's higher education facilities and businesses. Thanks to these initiatives, in 2011, the AMA regained its ranking as a top 5 business center in Europe and took the #4 spot according to European Cities Monitor.

The Dutch government is so interested in attracting foreign investment, they dedicated an entire branch of the Dutch Ministry of Economic Affairs called the Netherlands Foreign Investment Agency to aide foreign businesses in establishing firms in the Netherlands.With an inclusive, internationally-oriented character, the region prides itself on being "Pioneers in International Business".

I Amsterdam Marketing Campaign
Marketing to potential investors and tourists is very important to the AMA. Through a co=production between Amsterdam Marketing, amsterdam inbusiness, and the Expatcenter, the city and the region have launched a successful marketing campaign called "I Amsterdam" to inform potential visitors, residents, and business partners about the AMA. The I Amsterdam team credits the AMA's "forward-thinking green initiatives...high quality of living and multinational workforce" as some of the factors that have made the AMA "a unique opportunity to grow your business". To learn more about how to set up a business in the AMA, click here or to see which businesses are already established, click here. To see more cool videos produced on the AMA for the I Amsterdam campaign, click here.

Proposed Zuidas Dok Project
Zuidas Dok Project
Due to the continued growth of the area, the national government has made plans to expand the capacities of both the A10 freeway (the ringroad of Amsterdam on which Zuidas is located) and the Zuid metro station which serves the region in a plan called the Zuidasdok Project. To learn more about this project and others in Zuidas, click here. To learn more about transportation in the AMA, click the button.
Transportation and Infrastructure 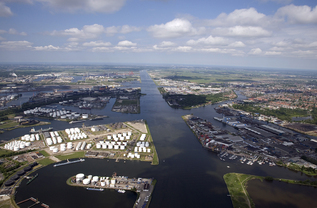 Other Business Centers
As more and more businesses come to Amsterdam, other parts of the region have become powerhouse business centers, especially vacant areas around the Port which is now home to such creative industry types as Redbull, MTV, and several gaming industry companies. Business Traveler magazine took notice of this and wrote an exposition on the expanding business districts of Amsterdam.

To learn more about the Port of Amsterdam, click the button.
World Class Ports
Top of the Page
Powered by